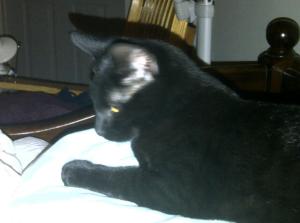 Mr . Pye is my beautiful, mouthy, four-year-old mini-panther (black cat). Of my three cats, Pyewacket is usually the one locked into a routine. Any variable in the routine is liable to make him run for cover. Pye is also my one flight risk. Careful when opening the door. There might be a cat trying to run out.

For some reason, he has recently decided that he needs attention in the middle of the night. Starting at about 1:00 AM, we had an endless night of Pye getting up in front of the TV, climbing on kitchen counters and knocking things off, climbing on the nightstand and knocking things off, crying for closed doors to open, revenge-bathing his sisters while they were trying to sleep, and getting on the foot of my bed to vigorously chase his tail.

This cat was going crazy nuts.

Some of this is not unusual, but the lunacy hit an all-time high.I petted him, gave him kitty massages and had him purring so loudly, I thought he’d wake the neighbors.  I finally got him settled around 3 AM. All quite and back to sleep I went until the alarm rang. I reached to turn it off and got a face-full of kitty behind.  GAK!! He scampered off to the antique cradle where he normally sleeps, sat and stared.

His level of concern was so heartwarming. 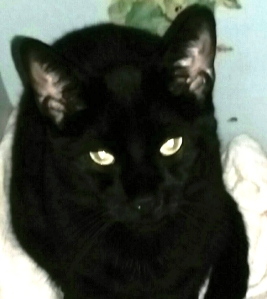 This morning went so wrong, so early. 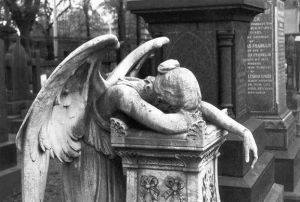