Yesterday I went in search of a local “haunted” cemetery. Egg Hill is rather notorious around here. The cemetery has been vandalized so many times that there is a definite possibility of being arrested by going there. I went in broad daylight, had camera in hand and was walking carefully between the graves so I was pretty sure no one was going to be concerned that I was there. 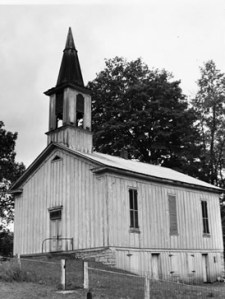 The story goes that on Oct. 31, 1870, the pastor set fire to the church with parishioners inside and the doors chained shut.

Some versions of the story say there was no fire but that the communion wine was poisoned. Some stories say that the pastor then went to the basement and beheaded the children at Sunday school. Some say that he hanged himself in the bell tower. The one fact that remains is that services were held there until 1927.

The church shows no signs of a fire and there is still glass in the windows under the shutters on the non-vandalized side. Of course, the church could have been rebuilt after the fire.

There is also no mention of such an incident in any of the records of the are. Ok, so no “local, late-breaking, up-to-the-minute” TV reporting back then, but surely there would be some record!

The clincher that the story is urban myth is that the dates on the markers aren’t within a plausible time frame for a mass murder. If the burns were severe enough to cause death, it is unlikely that the deaths occurred months or years apart. Parishioners would be buried in the churchyard, not somewhere else. The earliest birth was 1700 and the latest internment was 2005.

That being said, the church is not creepy, except for the damage done by vandals. It is on the National Register of Historic Places. It is maintained by Egg Hill Cemetery Association and there are flags on the graves of the veterans — as should be. 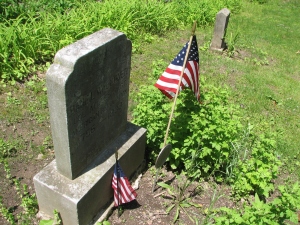 After leaving there, I came across another cemetery quite by accident. I have driven past it a number of times, but the angle of the road keeps it hidden unless you are coming from the cross street as I did yesterday.  It’s the Centre Hill Presbyterian Cemetery. One of the markers has been replaced by new marble and caught my interest.

There were small graves of children 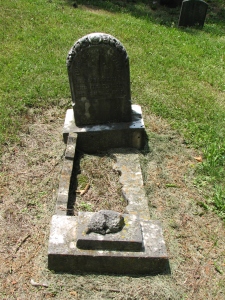 This is about 2 ft. in length.

and something I’ve never seen before: a stone mason signed his name to the marker he made. Look along the bottom and you can see a signature “S. L. Gibson” and the town name “Lock Haven.”

And now for the creep-out factor. I drove past Union Cemetery and was only able to take a quick photo.

There is no inscription from this side, but there are a couple of possibilities that I can surmise for now. It could be some sort of ring this bell for my angel” type thing OR it could be from the Victorian Era when people were afraid of being buried alive. Urban myth says that there was a rash of that occurring. Anyway, they rigged the bell to the inside of the casket. In case you woke up buried alive, you pulled the cord and the bell rang as a sign of “I’m not dead yet!” Ew.

I have to get back there and check it out.