I finished reading “Fifty Shades of Grey.” Not sure yet how I feel about this first in the trilogy, but I’m on to the second book.

I don’t mind reading erotica, but Dom/Sub is a borderline area and S/M is beyond the pale. If anyone who has not read the book and is afraid of spoilers, or if you get creeped out by the subject matter as stated, please be warned and skip this post. 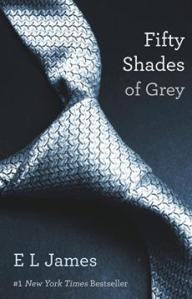 So Anastasia, it was his obsession with controlling what you ate that was the biggest contractual concern? Seriously???  Darlin’, if you objected to the pain of spanking, it should have been pretty obvious that the other “punishments” written out — “but not limited to” — should have made you draw a hard line with no negotiation. You objected to the various clamps — pain — and caning — pain — but whips and belts were OK??? What the hell was going through your head??

Because the author writes from inside Ana’s head I knew exactly what was going on inside her head. However, I found it unbelievable that with the first smack she didn’t scream “Red!” and then get up swinging.

I get that she was pinned, but frankly, after that first bout, she should have been a bit more proactive. Had I allowed myself to be put in that position — literally — as soon as he let me up, I would have threatened Christian Grey’s body parts, his ability to procreate, walk, or possibly even his ability to continue breathing.

Don’t think I’m kidding. The only time my ex-husband even growled in an authoritative manner, I had him up against the wall with my hand tapping the inside of his thigh while I reminded him that his wife was a stagehand and carried a knife. You can ask the poor man what happened when I felt that he actually threatened me.

So, Grey, I would have gone cosmic on your ass.

Now I know there are people who are into Dom/Sub. I know there are women (and men) out there who enjoy abuse. I know there are people out there who are without backbones and can never imagine standing up for themselves. Ana is not written as one of these people. She’s naive but not a wuss. I must say, though, that communication is not her strong suit. Neither is it Grey’s. That did not push the boundary of credibility for me. When it comes to sex, there are a lot of people who won’t say “don’t do that.” Even fewer will let on when there’s something disturbing in the relationship.

Several references are made to a therapist Christian has been seeing and that this person was the second opinion. I think he needs to get a third and one that can help him a little better. The therapist he has now is rather ineffective. But then, I don’t know how long he’s been in therapy.

So parts of the story are tough to take. My “inner goddess” and “subconscious” were both doing a happy dance when Ana finally says “enough” and leaves. I guess I’m not the Sub type. I’m really not the Dom type either.

There are two more books to get them together and moving on to a relationship that is less toxic, no matter what kind of sex they both agree upon.

Now for the writing. The author is from England. Most of the time, that’s not a problem. However, here’s a little FYI for Ms. E L James: We don’t call it a rucksack. We call it a suitcase or a bag and we take them on vacations, not on holiday. We call people; we don’t ring them. We push babies in strollers or carriages, not prams. There is no earthly reason not to set this in England. I think there are people in England who are into this type of sexual activity. I doubt this activity is uniquely American. The author might have a better handle on England’s geography as well. Editors, editor assistants, and fact checkers should also be called out for missing this sort of thing.

P.S.: Use of a Thesaurus wouldn’t go astray.

But characters are the meat of any book and James doesn’t badly. The characters are interesting enough for me to read the second book. I’ll just skip over reading the details in the boring S/M sex bits.